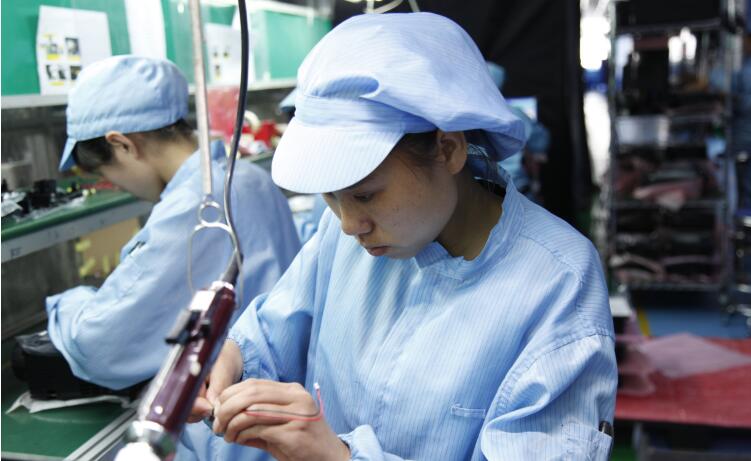 On February 25, Zhang Yi (pseudonym) released 74 job postings in the circle of friends. He is a recruitment agent who connects with major electronics factories in Zhuhai. "Take a look at my circle of friends first, and find the right one to help you talk," he said.

During the Spring Festival, he will release 20 to 40 recruitment information every day, but the frequency and number of recent updates have increased significantly. There are many Apple mobile phone foundries such as Flex International in recruitment companies.

New hire induction is a word that often appears in Zhang Yi's circle of friends. He knew that the factory's production line could not be stopped, and the factory was grabbing people and it was already on the table.

According to IT Times, Lansi Technology, located in Changsha, Hunan, offers a "refund" of 4,000 yuan for new hires, which can be obtained by newcomers after 26 days of work, and the referrer can also receive a 4,000-yuan reward.

A recruiter from Pegatron's Shanghai plant, which is in charge of iPhone 11 production and new 2020 iPhone development, said the current employee's basic salary is 2550 yuan, and he can get 5,000 yuan "rebate" after completing one month. "There are more than 3,000 today People came to fill in the information and filled up the tables at the recruitment site! "

Corresponding to the tide of resumption of work is the cold epidemic. When tens of thousands of workers have poured into Apple's industrial chain factories, how to achieve effective epidemic prevention? When will the production capacity of the delayed apples return to normal? Can the iPhone 5G version arrive on schedule?

On February 24, Lin Han (a pseudonym) from Yulin, Guangxi, took a chartered car to Shenzhen Flex Gujing, and 11 others accompanied him.

From my hometown to the factory, the road that is nearly 500 kilometers apart is not easy to walk. Since there are no direct high-speed rails and moving cars, if he takes a green car, he will spend more than 10 hours. If he chooses intermediate turnover, it means higher travel costs.

Lin Han said that the charter had left him at least four to five hundred yuan in toll and was faster.

Choosing to return to work on February 24, Lin Han has his own considerations.

However, this bus did not take him to the factory dormitory. Today, he is arranged to be isolated in the hotel, one by one, and he cannot return to the factory until 15 days after returning to the same physical condition. "Without doing anything, you can get the basic salary while lying down," he told IT Times. Flex currently has a base salary of 2,150 yuan.

A Flex recruiter told IT Times that Flex expected to return to work on March 15.

Compared to Lin Han, Zhang Qi (pseudonym) was considered a group that reworked earlier. On February 10, Lansi Technology, which provided panels for Apple, resumed work. His hometown near Hunan Province came to the park one day in advance. In order to return to work, Zhang Qi deliberately went to the village committee to obtain a quarantine certificate, in case someone stopped on the road.

However, after reworking Zhang Qi, after confirming that his body temperature was the same, he was not quarantined. The production line was short of people. He returned to the factory the next day and went straight to work.

Every day, Lansi Technology will assign a disposable activated carbon mask to employees, and they will be required to take their temperature to work and return to the dormitory. In the cafeteria, the dining table is pulled apart to maintain a certain distance, and the meals are packed in advance by the cafeteria. These measures reassure Zhang Qi.

Waiting to start, there is Foxconn. An agent recruiting for Shenzhen Foxconn Longhua Park told IT Times that Foxconn currently offers an hourly salary of 27 yuan, and under normal circumstances, it is difficult for new employees to work at the Apple foundry, and the hourly salary is difficult to exceed 20 yuan.

Recruiters said that if there is a 10-day activity trajectory certification in Guangdong Province, they can go to work directly after passing the interview without isolation.

In addition, according to IT Times, Pegatron sent someone to clean and disinfect the dormitory every day, and employees were banned from leaving the park. In the factory dining room, there is a partition between the dining tables. "You can't see others when you eat, and they can't see you," said a staff member.

At present, Pegatron does not consider workers from Hubei province, and is also very cautious about personnel in "heavy-hit areas" such as Bengbu and Fuyang in Anhui, Xinyang in Henan, Wenzhou in Zhejiang, and Yueyang in Hunan.

"Persons in areas with severe outbreaks need a health certificate, and people in other areas do not need to be quarantined. Physical examinations, filling in data, and issuing identification cards can go to work." Pegatron recruiters said.

Although large-scale foundries such as Foxconn and Flex have vigorously promoted unmanned robot production in recent years, from the urgency of demand for workers during the resumption of work, they still belong to labor-intensive enterprises. How can we ensure that the epidemic has not subsided yet? The safety of factory brothers and factory girls working in closed spaces is still a severe test.

Zhang Qi's roommates have returned. In the dormitory for seven people, only one bed is now empty. However, Zhang Qi found that the factory was still short of staff, although many more people had applied to register in recent days.

"Plant 12 mainly produces fingerprint lock chips for mobile phones. It is said that life is easy and there are still vacancies." In his opinion, it may be because Hubei employees cannot resume work due to the closure of cities and villages.

On February 11, Lansi Technology stated on the investor interactive platform that the company's production, management, ordering, operation, and epidemic prevention and control were all continuously and efficiently carried out in accordance with plans and measures in an orderly manner. The impact of medium, long-term production and operation is very limited.

However, from Apple's response, there is still anxiety over the recovery of production capacity of Chinese foundries. At Apple's annual shareholder meeting on February 27, CEO Tim Cook revisited the epidemic, calling it a "fairly dynamic situation" that had brought the company "challenges."

Previously, Apple stated that it was unable to meet its first-quarter revenue target due to the slower-than-expected resumption of work after the Spring Festival.

On February 25, Daniel Ives, an analyst at Wedbush Securities, a consulting firm, said that in the best case, the iPhone maker's supply chain will not be fully restored until early April, and in the worst case, the supply chain disruption may continue to 6 Later in the month, this will cause Apple's fall iPhone 5G release to be delayed for months.

At present, IT Times understands that Pegatron, the foundry that bears about 40% of Apple ’s iPhone production capacity, currently has more than 10,000 employees working overtime to produce iPhone 11. But in the second half of 2019, the reporter learned that The number of employees in the factory is at least 40,000 to 50,000 (a conservative estimate).

On February 24, a press conference in Shanghai revealed that starting on February 21, Pegatron is expected to arrange 40 buses daily to pick up employees in subordinate cities such as Henan, Shandong, and Anhui, and control the vehicle full load rate to less than 50%.

Based on this rough estimate, about 1,000 people can be employed every day.

The director of the First Mobile Phone Research Institute, Sun Yanxuan, believes that the impact of the epidemic on Apple is continuous. "Enough!" The epidemic has a certain impact on the logistics industry and will affect the speed of product shipment.

Huachuang Securities released a research report on February 24th that upstream electronic component suppliers are currently entering an accelerated period of resumption of work, and the industrial chain is expected to fully recover in early March.

However, according to the Tianfeng International Securities Research Report, iPhone shipments in the first quarter affected by the epidemic will decline by 10%.

"Apple's main foundry is still in China, and India's foundries have not yet performed well." Sun Yandi added.

On the other hand, the epidemic situation has begun to spread globally, especially in South Korea, where the number of confirmed cases is currently over a thousand. Yanyan Sun believes that this is another problem facing Apple. "Apple's panels are mainly purchased from South Korea's Samsung, which will have an impact."