Xiaomi announced today that it will release the Xiaomi Mi 10 series on February 13. In addition to using LPDDR5 memory, Xiaomi chairman and CEO Lei Jun also said that Mi 10 is the first mobile phone to support 8x8 MU-MIMO.

Lei Jun released this information on Weibo, and also briefly introduced 8x8 MU-MIMO, the core technology of Wi-Fi 6: MU-MIMO is a multi-user receiving multiple data streams at the same time, and 8x8 MU-MIMO is to support 8 strings simultaneously flow. 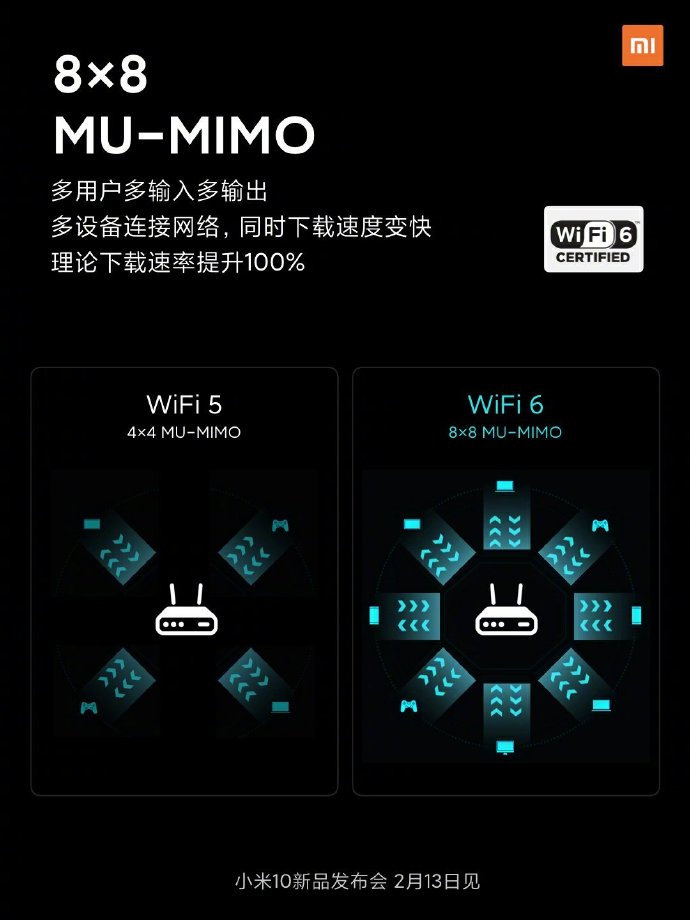 Lei Jun also wanted to introduce this function by way of example: Previously, each communication was "1 to 1 service", now multiple users enjoy "8 to 1 service" at the same time.

The Wi-Fi 6 technology supported by Xiaomi 10 can simultaneously complete data transmission with 8 1x1 devices or 4 2x2 devices in a communication cycle, he said.

In addition, the speed of Wi-Fi 6 supported by Xiaomi 10 is 16 times that of the commonly used 802.11n. In addition to this technology, it can achieve 4 times the effective speedup in congested areas such as offices or airports. It can also use TWT technology to notify mobile phones or IoT devices when they are not in use. When communication is needed, it enters the sleep state to achieve the purpose of power saving of the terminal.

At present, Xiaomi Mi 10 has confirmed that it will be released online on February 13.