Home › In-Depth › Huawei openEuler is a partner of UOS, not a competitor, analysts say
#In-Depth#

Huawei openEuler is a partner of UOS, not a competitor, analysts say 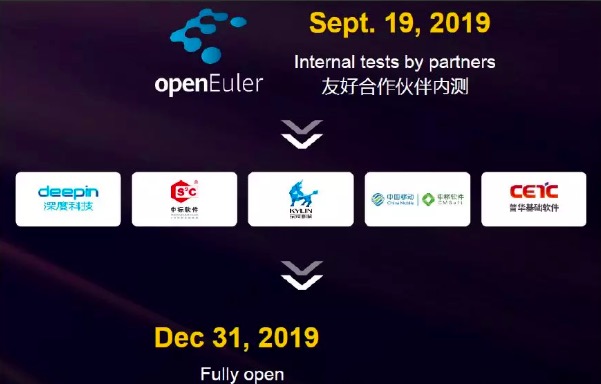 Huawei and Union Tech, the developer of the Unity Operating System (UOS) are partners instead of competitors, since Huawei’s openEuler is open source and the latter can conduct secondary development and launch commercial versions, analysts said.

On September 19, 2019, Huawei announced that it will open source its own server operating system EulerOS with an open source name openEuler. On December 31, 2019, it was officially launched and the openEuler open source community was also unveiled.

In a report released on Monday, Northeast Securities analysts An Yongping and Shao Zhuyin believed that Huawei is not a competitor of Union Tech in the operating system field, but a partner.

They said that in the field of operating systems, openEuler is the key choice for Huawei to build an open source operating system community. Huawei open-sources the underlying technology to partners, who can then develop and package it as a commercial version.

Huawei Euler server operating system is Huawei's operating system software for KunLun's open architecture. It is based on a stable system kernel and supports mainstream virtualization and software and hardware.

EulerOS was developed by the Euler Labs of the Central Software Institute in 2010. It is positioned as an operating system software for enterprise-level general server architecture platforms, and supports Kunpeng processors and container virtualization technologies.

EulerOS is one of the best operating systems currently supporting TaiShan servers. It has strong competitiveness in terms of performance, compatibility, and power consumption, and continues to promote the ecological construction of Kunpeng chips.

EulerOS is also one of the most secure operating systems at present, which can provide various security technologies to prevent intrusion. EulerOS provides high reliability and high stability technical guarantee for customer business systems in terms of standard qualification and RAS features.

1) Vertically optimize the operating system software stack based on the characteristics of Taishan server chips;

2) Applied to the PaaS layer, an enterprise-level container service based on open source Kubernetes and Huawei iSula container engine technology, with enhanced commercialization features based on the open source native platform;

EulerOS's development team has made outstanding contributions to the Linux kernel community in 2018. It has entered the top 15 in the six versions of the Linux kernel (4.15-4.20), and has improved from 14 to 6th.

The Linux kernel community found and repaired 24 CVE vulnerabilities throughout the year, and each release version adopted an average of 240+ patches. The company in the CT field remained the first to contribute, far exceeding other vendors.

Northeast Securities believes that in the future, Huawei will rely on chips such as Kunpeng and Kirin to position itself in the core of computing in the IT industry, gradually transforming itself into a core manufacturer of CPU chips, building an industrial ecosystem, and empowering customers in the industry as its core mission and vision.

In the first stage of building an industrial ecology, especially the internal R&D stage, Huawei must comprehensively build a whole industry chain architecture including Bios, CPU, OS, middleware, database, and storage from the bottom to ensure the integrity and availability of the overall industrial ecology in the early development stage.

Northeast Securities believes that with the gradual improvement of Huawei Kunpeng's industrial ecology, Huawei will gradually withdraw from areas where the market is relatively small, customers have high requirements for services, and are more professional. Great industrial ecology.

This is the imitation of the historical experience of the IT industry of professional manufacturers such as Wintel system (Intel, Microsoft) jointly defeated IBM, a vertically integrated manufacturer. It is difficult to imagine now that there are painful historical lessons, Huawei will choose its own development path, the report said.