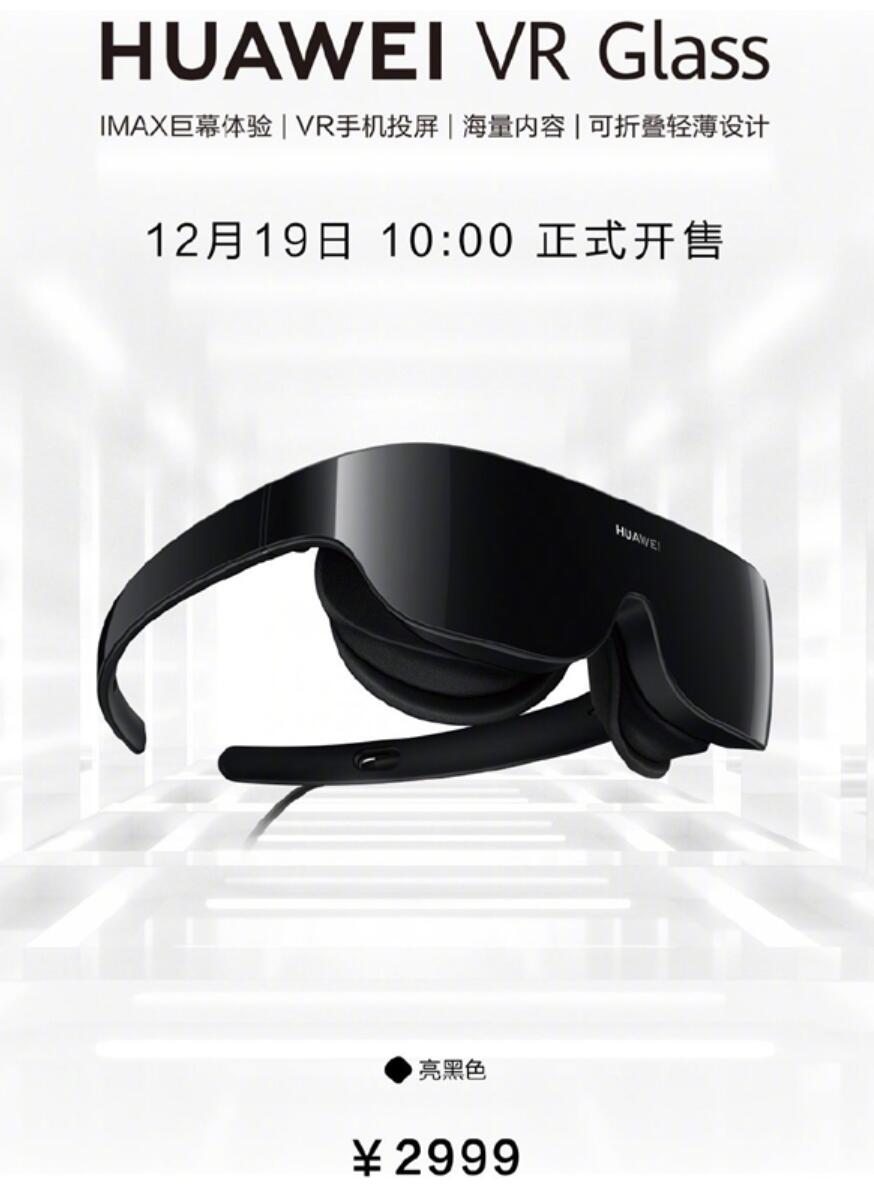 Huawei released the new virtual reality (VR) glasses of Huawei VR Glass on September 26. On December 19, the device is officially launched for sale at 2,999 yuan. Early buyers can get a 200 yuan discount.

Huawei claims that it can effectively improve the image smear, greatly reduce the sense of grain and haze, with a 3D immersive screen, with a 90-degree field of view, you can enjoy the immersive sense of IMAX at home.

And it uses a semi-open dual speaker design, the sound field is wide, the sound is clear and full of layering. At the same time equipped with dual Smart PA smart amplifier chip, the dynamic range of music output has been greatly improved, louder volume, louder and more powerful bass, and fuller sound quality.

In addition, it uses an ultra-short focus optical module to achieve a body thickness of only about 26.6mm (weight is only 166g). The lightweight body design is more suitable for wearing and suitable for long-term use.

It supports the independent adjustment of monocular myopia within 700 degrees. With VR Glass, both eyes can be clearly seen, which is suitable for most people.

More importantly, when VR Glass is connected to a computer or mobile phone, the mobile phone and computer can actively supply power to the glasses through the cable. The VR mobile phone connection cable reserves a Type-C interface, and uses 5V / 2A and above chargers or mobile power for the mobile phone. Powered at the same time as VR Glass, there is no need to worry about power issues for long periods of use.

In terms of content, VR Glass has a unique Huawei VR video platform, including IMAX blockbusters, popular TV series, cartoons, etc., with a total length of more than 30,000 hours. At the same time, it introduces excellent platform resources including iQiyi, VeeR, GVR, etc., and can enjoy private theater at home.

Shanghai Securities said that the advantage of Huawei's new VR glasses is mainly its portability: its front end thickness is only 26.6mm, which is only about 1/3 of mainstream VR products; its weight is 166g, which is about 30% of Oculus Quest. As a VR video viewing device, these glasses are undoubtedly very competitive.

However, for the shortcomings of the product, Shanghai Securities believes that this glasses itself only has 3DoF positioning capabilities (supports rotation of the viewing angle but does not support displacement) and cannot perfectly experience some VR games.

However, this may not be a good attempt: If you only consider VR games as a visual upgrade of traditional video games, you only upgrade the traditional 3D game screens to the panoramic screens of VR games, while retaining the game's operating methods, etc. Other factors, then, 3DoF is perfectly capable for this type of game.

According to New Age Securities analysis, the development problems of VR have been more adequate in the 4G mobile Internet era, mainly due to immature hardware, immature networks, and inconsistent standards, which are manifested in the difficulty of breaking through many technologies, the relative lack of content, and the lack of killers Consumer products, etc.

"In response to the current heavy VR glasses and vertigo, Huawei has launched a lighter, thinner and cooler VR terminal-Huawei VR Glass, to promote more consumers to love VR and free our hands."

On October 19, Huawei's rotating chairman Guo Ping stated at the 2019 World VR Industry Conference that young people now watch TV less and spend more time on mobile phones. However, the big screen experience cannot be satisfied by mobile phones. The emergence of VR will replace the big screen and give a personalized immersion space. In the future, VR / AR terminals will gradually introduce more interactive methods such as voice and gestures to further free their hands.

"VR / AR will be the first applications in the 5G era." Guo Ping said that after experiencing the peak of industry hype, the VR industry fell into a trough in 2017. Now, the introduction of new VR terminal products and the commercial deployment of 5G are pushing it out of the industry trough. 2019 is a period of industrial renaissance.