Thanks to the growing popularity of Xiaomi bands in China and other Asian markets, global wearable band shipments increased 65% year-on-year to 45.5 million units, with the Asia-Pacific market and Greater China showing the strongest growth momentum, according to the Canalys report.

Greater China is still the largest market for wearable bands, contributing 40% of global shipments, with a year-on-year growth rate of 60%.

The Americas, Europe, the Middle East and Africa (EMEA) contributed another 44% of global shipments.

Asia Pacific (except Greater China) is still the smallest of the four major regional markets, accounting for only 16% of global shipments, but the region's growth rate ranks first, compared with the third quarter of 2018 With 130% growth, retailers ’strong performance was one of the main drivers of growth. 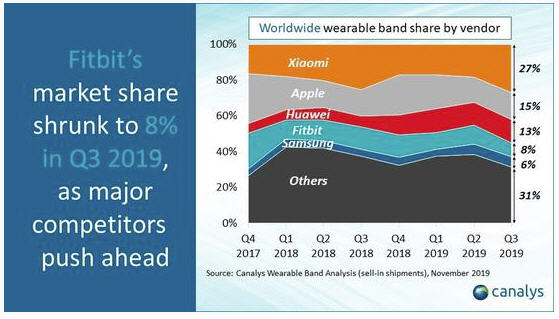 From a global perspective, Xiaomi bands are still far ahead, with shipments of 12.2 million units in the third quarter, an increase of 74% year-on-year.

Since the third quarter of 2015, driven by strong domestic market performance and active overseas expansion strategies, Xiaomi's global market share has reached a new high of 27%.

Apple after Xiaomi welcomes the highest year-on-year growth rate since the second quarter of 2017.

The Apple Watch Series 5 released in September contributed 60% of the company's shipments during the quarter. The watch has new features such as a dial that is always displayed and other self-defined functions.

Since the end of last year, Apple has been expanding production capacity in response to growing market demand.

Huawei, which shipped 5.9 million units in the third quarter, ranked third, with an annual growth of 243%. The strong performance in the domestic market puts Huawei ahead of Fitbit.

Fitbit, ranked fourth, showed a slight weakness during the quarter, and was the only supplier among the top five suppliers whose shipments did not increase year-on-year. Samsung ranked fifth, and the recently launched Galaxy Fit boosted the company's Asia-Pacific performance.